Men growing (intentional or unintentional) breasts by using Pueraria Mirifica is not surprising. Men and women have the same hormones, but men typically have more testosterone hormones whereas women have more estrogen hormones.

Pueraria Mirifica (PM) is an herb native to southeast Asia that contains both miroestrol and deoxymiroestrol in its roots. These two compounds are very different from other phytoestrogens in that they possess the highest estrogenic activity among the known phytoestrogens due to their structural similarity with estradiol.

PM is currently the only known herb known to contain miroestrol. Miroestrol is nearly identical in molecular structure to estriol, one of the 3 main estrogens produced by the human body in both genders.

Estradiol is the strongest type of the 3 main estrogens and it is also the main human estrogen which is found in all women who are at the stage of breastfeeding, the time when women’s breasts tend to be at their largest and fullest. Analysis has shown that miroestrol and its precursor deoxymiroestrol has approximately 3,000 times the estrogenic activity of soy isoflavones.

Because men are starting with much lower estrogen levels than the average women, men may not be able to consume enough estrogen from common phyto-estrogens, such as soy. Pueraria Mirifica, by contrast, contains phyto-estrogens potent enough (in fact, 3,000 times more potent) to make a difference.

Because men are starting off with lower levels of estrogen and higher levels of testosterone to begin, it may take longer for men to begin to see changes.  It is advisable that men embarking on a pueraria mirifica enhancement program give it at least 3 – 6 months for the the body to adjust to the hormonal changes.

On the other hand, it may be easier for men to begin taking PM for breast growth since men do not have a menstrual cycle to deal with and can start off with higher dosages of PM.

We highly recommend complementing your PM with an anti-androgen such as Saw Palmetto, which works by preventing testosterone from converting to dihydrotestosterone (DHT) – a more powerful form of testosterone which blocks estrogen, the hormone you are trying to get.

For best results, we also strongly suggest that you consider complementing your PM supplement with a breast cream. Because the skin directly absorbs the products you put on it – instead of filtering it through the liver and the kidneys – using a topical cream should be an integral part of any natural breast enhancement routine.

Check out our article for more tips on how to maximize your growth on pueraria mirifica!

Where Do I Get Pueraria Mirifica for Male Breast Enlargement?

As you probably already know, there are a gazillion Pueraria Mirifica products on the market today. Not all of them are trustworthy or even effective. If PM is going to work for you, you want to make sure you are taking the highest-quality PM – which means that it is farmed cultivar Pueraria Mirifica ROOT.

We only recommend a few products that adhere to these standards, our favorite being Purafem. It’s incredibly important because it is only farmed cultivar that contains the potent phytoestrogenic activity that makes PM work. Wild (not farmed) Pueraria Mirifica may have little to no dexoymiroestrol or miroestrol – it may be marketed as PM, but in essence, it’s a placebo!

Pueraria Mirifica Side Effects for Men 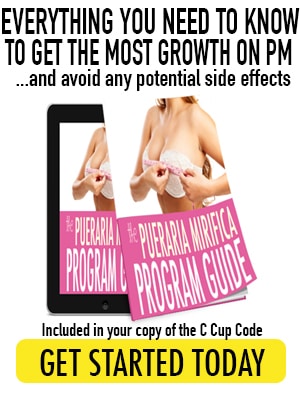 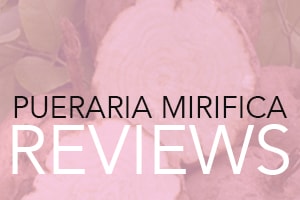 This website uses cookies to improve your experience while you navigate through the website. Out of these cookies, the cookies that are categorized as necessary are stored on your browser as they are essential for the working of basic functionalities of the website. We also use third-party cookies that help us analyze and understand how you use this website. These cookies will be stored in your browser only with your consent. You also have the option to opt-out of these cookies. But opting out of some of these cookies may have an effect on your browsing experience.
Necessary Always Enabled
Necessary cookies are absolutely essential for the website to function properly. This category only includes cookies that ensures basic functionalities and security features of the website. These cookies do not store any personal information.
Non-necessary
Any cookies that may not be particularly necessary for the website to function and is used specifically to collect user personal data via analytics, ads, other embedded contents are termed as non-necessary cookies. It is mandatory to procure user consent prior to running these cookies on your website.
SAVE & ACCEPT
Do you want to know the best tips and tricks we use to
MAXIMIZE BREAST GROWTH?
Yes!ORNo
Sign up to get the latest, greatest ways to boost breast growth!
Thank you!
Oooooh, you're gonna get so much good stuff coming your way...
Close