I have a friend who is fanatical about her beer. It’s all she ever drinks and she knows more about beer brewing and specialty beers than anyone I’ve ever known.

And did I mention she has an enviably gigantic pair of all-natural breasts?

So when I first came across the ingredient “Hops” in natural breast enhancement pills, I immediately thought of her…and then started drinking beer instead of wine or cocktails instead.

Yes, it was hopeful thinking and to be honest – the occasional beer or two didn’t do much for my breasts. But there is something to this hops and breasts connection. Let’s explore it, shall we?

Hops is basically what gives beer its distinct, slightly bitter taste. It was also a mainstay in traditional folk medicine for its diverse medicinal qualities. 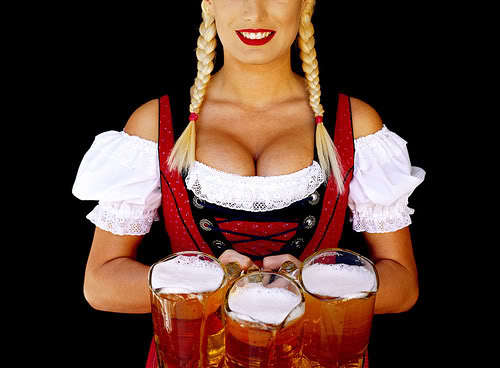 Throughout the ages, hops has been used to treat everything from benign coughs to more severe digestive conditions, like IBS, ulcers, and even Crohn’s disease. The reason for the latter is the bitter-ness of hops aids digestion while simultaneously stimulating the liver to promote the secretion of bile and other digestive juices in the body.

The tannins in hops have also been known to have strong antiseptic qualities and aid in the healing of inflammatory conditions – even being used to treat rashes and hives.

Okay, okay, you say – that’s all good and dandy…but what can hops do for my breasts?!

We’re getting there. You see, despite beer being a stereotypical “man’s drink” – it’s actually very beneficial for women, as well.

That’s ’cause hops has phytoestrogens – you know, plant estrogens that are similar to estrogen. The specific phytoestrogen found in hops and believed to be responsible for breast enhancement is called 8-prenylnaringenin.

This phytoestrogen was found to be strong enough to result in menstrual disruption among female hop workers. And it’s also what’s to blame for a common condition known among brewers as Brewer’s Droop – aka man boobs.

So Can Drinking Beer Help Me Get Bigger Breasts?

Yes, beer does have hops. And yes, hops does possess strong estrogenic action.

So drinking loads and loads of beer will give those breasts a boost, right?

Well, the answer is not so simple. You see, ‘though hops does contain the phytoestrogen 8-prenylnaringenin, it contains very little of it. At best, only an estimated 10% to 20% of the phytoestrogen in hops makes it to your beer.

Of course, it really depends on how the beer in question was produced and what sort of beer it is. But overall, we’re going to go ahead and answer this question with…

“Drinking beer may help boost your breast size – if you stick to drinking only super hop-py IPAs and you drink a lot of them. But since drinking too much beer might also result in another body change – beer belly, anyone? – it might be wiser to simply opt for a hops supplement to get a concentrated phytoestrogenic dose and save the super hop-py IPA beer drinking for nights out with your friends.”

All in all, ‘though there is no conclusive scientific evidence to prove that drinking very hop-ped beers results in bigger breasts, you might want to know…

I guess we’ll never know…’til we try it out ourselves. If any of your dear readers find yourselves in Bulgaria and can engage in this little boob experiment, we’d love to know about it!

Beer might not result in C Cups…but there are some proven methods that will. Find out everything in the C Cup Code!

HGH: Why this Little Hormone is Crucial for Breast Growth and How You Can Get More of It

How to Noogle: A Definitive Guide to Getting Bigger Breasts with the Noogleberry

This website uses cookies to improve your experience while you navigate through the website. Out of these cookies, the cookies that are categorized as necessary are stored on your browser as they are essential for the working of basic functionalities of the website. We also use third-party cookies that help us analyze and understand how you use this website. These cookies will be stored in your browser only with your consent. You also have the option to opt-out of these cookies. But opting out of some of these cookies may have an effect on your browsing experience.
Necessary Always Enabled
Necessary cookies are absolutely essential for the website to function properly. This category only includes cookies that ensures basic functionalities and security features of the website. These cookies do not store any personal information.
Non-necessary
Any cookies that may not be particularly necessary for the website to function and is used specifically to collect user personal data via analytics, ads, other embedded contents are termed as non-necessary cookies. It is mandatory to procure user consent prior to running these cookies on your website.
SAVE & ACCEPT

Get the Simplest, Smartest Tips to Help You
GROW BIGGER BREASTS

The most helpful, boobie-growing tips and tricks delivered straight to your inbox :)